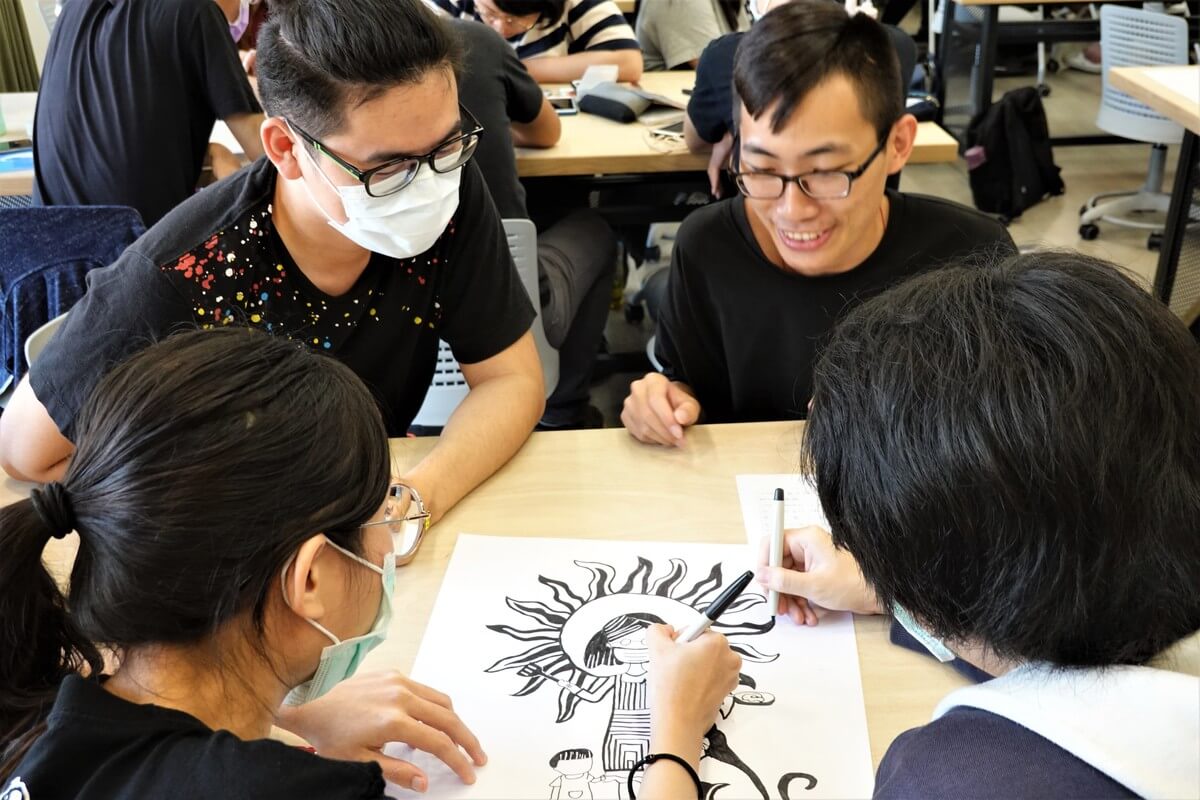 NSYSU Si-Wan College, together with Pier-2 Artist-in-Residence Program jointly organized an art workshop, conducted by Pier-2 resident artist from South Korea Seungyoun Lee and Assistant Professor of the Si-Wan College Kayo Ito from Japan, who guided over 60 students to create works of art. Through this multicultural and interdisciplinary workshop, students and teachers engaged in a fruitful brainstorm. The works of the participating students were displayed in Pier-2 Art Center along with Lee’s works, letting the visitors witness “the omnipresence of goddness in life”.

“Everyone create one god!”. The works of Seungyoun Lee are inspired by ornamental puppets often seen in Korean temples and funeral settings. For her, religion and mythology are not confined to the walls of a temple. She believes everybody can create art, as long as they are good observers of the surrounding world, and also that any ordinary person has the potential to shine like a deity, hence the main theme of the workshop – “Life is god, everyone is god”. She encouraged the students to act as models for each other to create designer “images of God” by using laser carving technology.

The works of students were very diverse; cooks, sportspeople, and manga characters were an inspiration for artistic creation. The students did not have any background in art, but they drew inspiration from life to create great artworks, which Seungyoun Lee found startling. Fourth-year Malaysian student of the Department of Political Economy Lau Wei Cong depicted a typical campus setting: a student riding a scooter, surrounded by two monkeys. Liu said, that the workshop was not only great for student-teacher communication but was also deeply inspirational and motivating. Another student of the Department of Political Economy, Hirooki Sato from Japan, said, that he had visited shrines in Japan, but never really understood the cultural background behind it. Thanks to the international perspective of the courses at NSYSU, he could understand the differences between religions in Taiwan, Japan, and Korea.

Assistant Professor Kayo Ito, who teaches a general education course in religions of the modern Japanese society, said, that the concept of Si-Wan College is to cultivate slashers who dare to explore by providing interdisciplinary education. The purpose of this interdisciplinary event is to let students learn and get new ideas about different religions, leaving traditional views behind. Assistant Professor Kayo Ito and Seungyoun Lee agree, that comparing to Korea and Japan, Taiwan is a very devout place and young Taiwanese people are more accepting of religions. Seungyoun Lee incorporated some Taoist customs in her works, such as the practice of burning joss paper. Her works were displayed in Pier-2 Art Center, together with the works of the students.

More information on the exhibition.