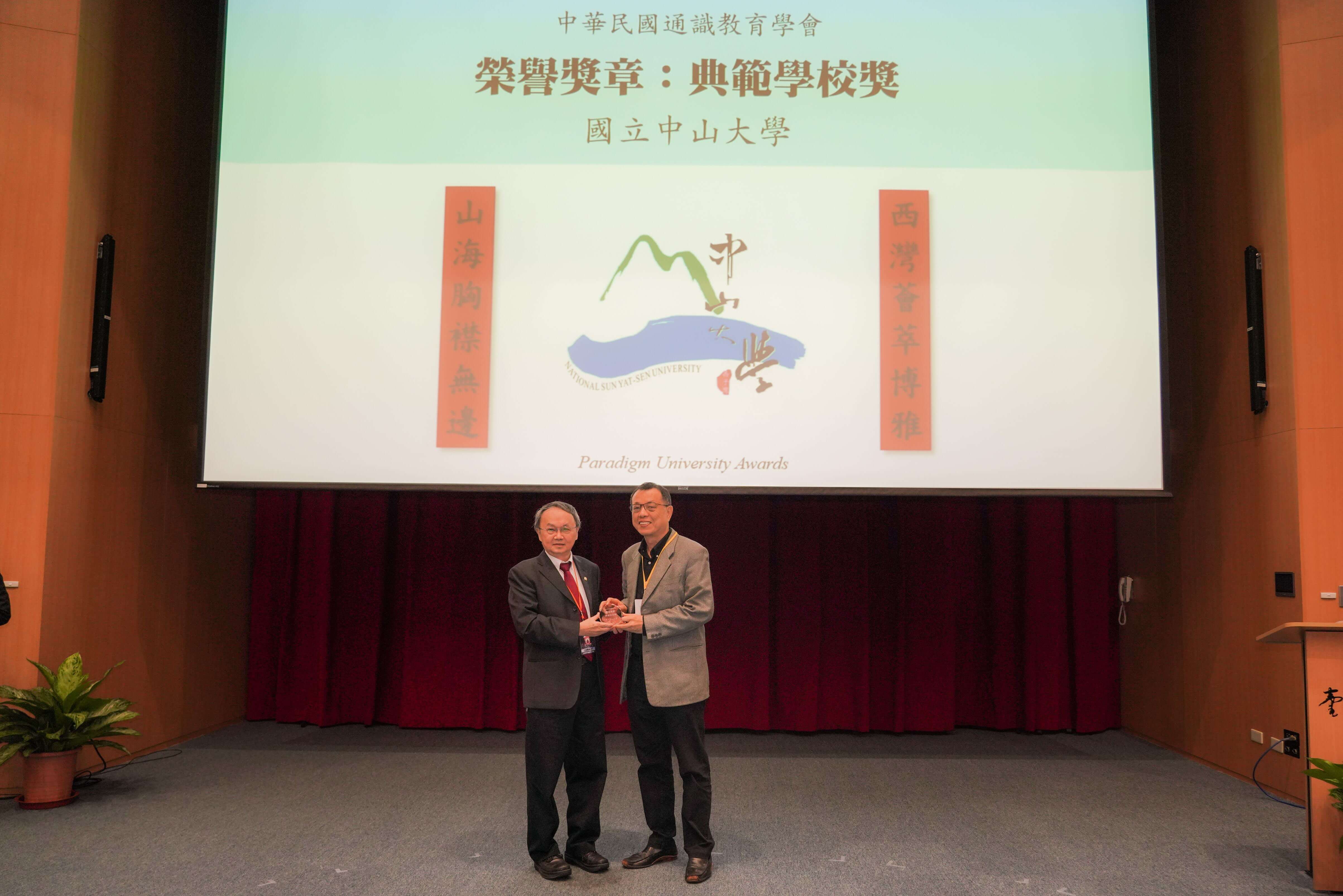 NSYSU has been awarded for successfully implementing interdisciplinary learning and integrative courses, as well as for putting their maxims “Exploration, Practice, Interdisciplinary” in the curriculum. In his award ceremony speech, Dr. Rong-Huay Juang, President of Chinese Association for General Education, praised the general education section of NSYSU for expressing an open and progressive attitude towards liberal arts education.

When accepting the award on behalf of the University, Prof. Dun-Hou Tsai, Dean of Si Wan College at NSYSU, noted that the School has put great effort in developing courses in general education in the past twenty-three years. The official institutionalization of Si Wan College on 1st February, 2019 marked a historic landmark in the progression of the general education at NSYSU. The newly founded College incorporated two previously independent institutions, the Program in Interdisciplinary Studies and the Center for General Education. Benefitted from the University’s well-structured curriculum and interdisciplinary approach towards studying general education and liberal arts, Si Wan College aims to encourage students from different fields to recognize the key role that interdisciplinary learning and thinking plays at the university level. Last year, Si Wan College organized an innovative event, “Taiwanese Cultural Week,” in which various topics related to Taiwanese culture were presented through taught programs, exhibitions, and performances. Students were involved in activities such as organizing traditional open-air banquets, exploring the history and evolution of the electric parade platforms in the context of Taiwanese folk customs, as well as presenting a female version of the traditionally male-dominant Ba-Jia-Jiang dance. Another topic that will be introduced in the following year is the aboriginal culture of Taiwan.

Nowadays, our society faces multifaceted issues that cannot be solved by knowledge from one single discipline. To answer this call, the Program of Interdisciplinary Studies at Si Wan College has thus designed a series of thematical workshops, gathering students from different fields to discuss needs and difficulties that many towns and villages in Taiwan face, as well as devising a practical and effective problem-solving strategy. Adopting field trips as its principal means of teaching, members of the faculty and students who attended the workshops visited places like Aogu Wetland, Jinguashi, Cijin, Gushan, and Yancheng Districts, Taipei, and Qixingtan Beach, and explored topics like sustainable marine ecology, smart city, landscape narrating, and the culture of fish-eating.

Another unprecedented event held by Si Wan College was a two-days freshers welcome camp, “Approaching the Life at the University.” The event was led by twelve members of the faculty from six different departments, with assistance of twelve enthusiastic senior students. One hundred and twenty freshers from the 2019 academic year engaged in a series of activities focusing on self-exploration and self-reflection. Through a dialogue between the faculty members and students, this event was expected to accustom students with the three principal values that NSYSU upholds, i.e. Genuine, Kindness, and Grace, as well as evoking students’ curiosity about the unknown. Other extra-curricular activities dedicated to enriching students’ life at the university include student-led social gatherings, workshops and seminars on a wide range of topics, such as PE, philosophy, and literature.

With regard to academic research, in 2019, the College executed twenty-seven government-funded projects, a number that reaches almost one fourth of the total number of University’s projects sponsored by the Ministry of Education. Si Wan College plans to allocate sufficient funding to improve its research and teaching resources and facilities, in order to raise and promote the awareness of students from across the University of the importance of interdisciplinary studies and learning.